How are electric vehicles being incentivised in 2021?

A reduction to the plug-in car grant will have little impact for company car and van drivers. Model variety continues to grow, making EVs more accessible than ever.

The UK recently brought forward its ban on the sale of new petrol and diesel cars by an entire decade, with the ruling now slated to take effect from 2030. It came as a surprise to many when a scheme that aims to make electric vehicles (EVs) more affordable was cut.

In March 2021, the government reduced the plug-in car grant (PICG)  for new EVs from £3,000 to £2,500, with the threshold for qualifying purchases also falling from £50,000 to £35,000. In theory, this meant that EVs had become even more expensive and limited the number of models that qualify for government support.

In reality, the £500 reduction will make little difference for private buyers, with many brands dropping list prices to reflect the change, and in some cases introducing new ‘mid-range’ models that now meet the £35,000 cut-off; one of the more popular EVs in the UK, the Kia e-Niro, is now available with the long-range 64kWh powertrain but at a reduced price of £34,945.

Models such as the BMW i3 and Peugeot e-2008 have also seen price drops, while manufacturers such as MG will offer increased deposit contributions instead. Premium EVs like the Tesla Model 3 and Ford Mustang Mach E are now out of the running for the PICG, while mainstays like the Nissan Leaf, Renault Zoe and MG ZS EV remain solid entry-level options.

What does this mean for company cars?

For businesses looking to adopt EVs there will be little impact, and tax breaks remain an attractive reason to go zero-emissions. Fleet and company cars currently account for around half of all new EV registrations in the UK, and the sector is expected to continue driving EV sales despite the reduced PICG. Company cars did benefit from zero tax rates on benefit-in-kind (BiK) between 6 April 2020 and 5 April 2021, but now this ‘introductory offer’ has increased slightly, rising to 1% in 2021/2022 and 2% in 2022/2023.

Government support also remains for both home and workplace charging installation. This is broadly considered vital for a smooth transition to EV ownership. The idea is to plug in overnight or during the working day when the car is not in use, enjoying lower electricity rates and in most cases avoiding the need to stop at public charge points. Crucially, Rishi Sunak’s 2021 budget included new capital allowance provisions that should make it easier for businesses to install EV charging points.

Capital allowances mean that the cost of certain capital assets can be written off against taxable income. A new ‘super deduction’ means that companies will benefit from tax relief amounting to 130% of the cost of any investments in new equipment – such as EV charging stations – along with a 50% first-year allowance for special rate assets. Under the super-deduction, for every £1 a company invests, its taxes are cut by up to 25p. Experts have cautioned that some charging installations may not be considered eligible for the super deduction, and care should be taken when investigating whether investments will qualify for the 130% rate. The new allowances will be in force until 31 March 2023.

First Year Capital Allowances are also available, where business can claim 100% of the cost of zero-emission vehicles in the year of purchase. This allowance was due to expire in April 21, but was extended in the March budget until 2025. For further information see the Capital Allowances Policy paper .

There are numerous charge point providers in the UK that support both home and workplace installations, occasionally providing a trade discount for bulk orders. Pod Point, bp Chargemaster and EVgo are just a few popular brands, but even bulk retailers such as Toolstation and Screwfix now sell charging points. 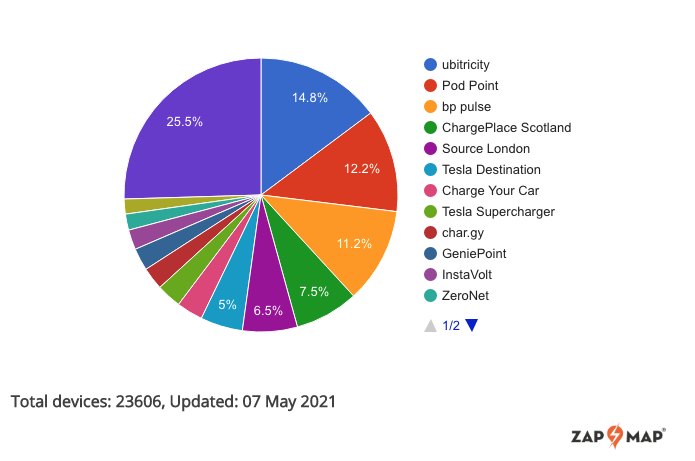 The government’s “build back better” recovery roadmap revealed during the pandemic pledges over £1.8bn toward initiatives that can encourage the adoption of zero-emissions vehicles. It details that some of those funds will be directed toward charging stations at motorway service stations and main A-roads, as well as continued subsidies for the installation of home and workplace charging stations. The Electric Vehicle Homecharge Scheme  (EVHS) grant currently provides a 75% contribution to the cost of one charge point and its installation, up to the price of £350 (including VAT), per installation.

But it is not all carrot: local initiatives will also serve as a stick, forcing many drivers across the country to ditch petrol and diesel. In Oxford, the council has approved the trial of a zero-emissions zone that will begin in August 2021. Charges will vary depending on a vehicle’s emissions, ranging from between £2 and £10 per day from August 2021. Daily charges will double from August 2025, meaning the most highly polluting vehicles could incur a daily penalty of £20. EVs will pay £0.

The city of Bath has already introduced a similar initiative. The clean air zone (CAZ) will allow zero-emissions vehicles to enter the city centre for free, while polluting vehicles will be penalised. Efforts will be made to clamp down on late payments with additional charges lumped on – much like a parking ticket. Zero-emissions zones are also due to roll out in Birmingham, Bristol, Cambridge and Portsmouth in 2021. London will be expanding its emissions charges outside of the city centre to more boroughs.

As more models become available across a growing range of vehicle segments, EVs are becoming more attractive for more prospective buyers. Elsewhere in the world, reductions to EV incentives often coincide with a decline in EV sales. Government support will remain integral at this early stage, and company car sales will continue to prop up the UK’s EV market as consumers transition away from petrol and diesel. Incentives that reduce the cost of charging infrastructure at home and work will also be key, and businesses would be wise to take advantage of the tax relief on offer.

Are tax-free EVs a no brainer
for company car drivers?

The growing range of zero emissions vehicles presents a real opportunity to cut expenses, but there are
drawbacks to consider.

Over 9,000 accountants and finance professionals trust our award-winning tax and accountancy software to take their practice forward in 2021.